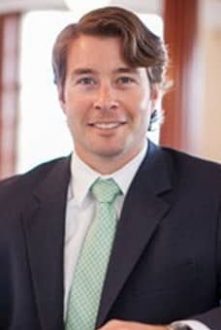 Born and raised in Andover, Massachusetts and a graduate of Gettysburg College, Attorney Douglas Henderson joined the Kiley Law Group as an intern in 2011. Since that time, Doug has become an integral part of the Kiley Law Group’s legal team through his dedication to helping those who have been injured by the carelessness and negligence of others.

Doug graduated from Andover High School in 1998, where he was a Captain of the Varsity hockey team. Thereafter, he took a post-graduate year at the Williston Northampton School in Easthampton, Massachusetts, where he excelled academically and was a standout on the men’s Varsity football, hockey, and lacrosse teams. He continues to participate in men’s hockey leagues throughout Massachusetts and New Hampshire and he is an avid outdoorsman, always looking for an opportunity to ski, hike, or fish.

Attorney Henderson’s passion for athletics and his tenacity on the field and ice have carried over to his legal career. Since his induction to the Massachusetts Bar in 2012, his unwavering commitment to the law and his clients has resulted in substantial and favorable outcomes for his clients. Attorney Henderson’s integrity, compassion, and empathetic nature fuel his desire for justice and his drive to get his clients what they deserve.

40 years Over $500 Million in Personal Injury Cases Recovered! Results Matter. Call the MILLION DOLLAR MAN. Justice, for people like You.
The experienced lawyers at Kiley Law Group of Massachusetts have been representing accident victims throughout the state of Massachusetts for more than 40 years now. During that time period, we’ve obtained more than $500 MILLION DOLLARS on behalf of our clients, helping them recover financially so that they can begin to put their lives back together. If you’ve been involved in an accident resulting in major injuries, DO NOT HESITATE to contact our experienced legal team.